The Government of Jamaica has been lauded by the Government of China for the current level of growth in the economy, and the steady reduction in the rate of unemployment. As at April 2022, Jamaica’s unemployment rate stood at a 6%, in contrast to a high of 12.6% in July 2020.

During a Courtesy Call on Minister Samuda on September 7, His Excellency Chen Daojiang, Ambassador Extraordinary of the People’s Republic of China to Jamaica, congratulated the Labour Minister on the country’s high level of employment, noting that “nearly every Jamaican has a job”.

In response, Minister Samuda stated that Jamaica’s success is due in large part to the cooperation and support provided by the Government of China, especially in construction and infrastructure development, which he noted, has been “greatly enhanced by cooperation with the Chinese Government”. The Minister further expressed his satisfaction with the level of expertise which Chinese construction and infrastructure companies have brought to Jamaica, and the attendant transfer of knowledge to the Jamaican workforce. The Ambassador noted that up to 96% of the workforce engaged in some infrastructure projects are Jamaican nationals.

Minister Samuda said that he expects the continued “partnership to bear great fruit in the future”. In a reference to China’s underwater highways which he had personally experienced, the Minister commended the Ambassador on what he called the “infrastructural exploits of China” noting that the “technology was unprecedented in the world”.

The Ambassador expressed his pleasure at the state of China/Jamaica bi-lateral relations, and pledged his support to the elevation of the existing relationship toward the establishment of a strategic partnership between the two countries. He noted that the recently constructed Ministry of Foreign Affairs and Foreign Trade (MFAFT) building and the North/South Highway are “new landmarks of the China/Jamaica friendship”, noting that Chinese nationals were being encouraged to integrate with the Jamaican workers, thereby strengthening their mutual social development. Ambassador Chen Daojiang observed that there are currently more than 60,000 Chinese nationals residing in Jamaica, collectively contributing more than $2billion annually to the country’s social/economic development.

For his part, Minister Samuda confirmed the existence of a large Chinese community in Jamaica over many decades, and remarked that the current work arrangements are likely to increase the proportion of Chinese descendants in Jamaica. He assured the Ambassador of the Ministry’s commitment to ensuring the expeditious processing of Work Permits “for Chinese nationals whose expertise is needed on development projects in Jamaica”.

Chinese nationals are the largest group of international workers in Jamaica, accounting for 40% of Work Permits approved annually.

Ambassador Chen Daojiang noted that 2022 marks fifty years of Bilateral Relations between the peoples of Jamaica and China, and advised the Minister that his government is planning a series of activities to observe the milestone. 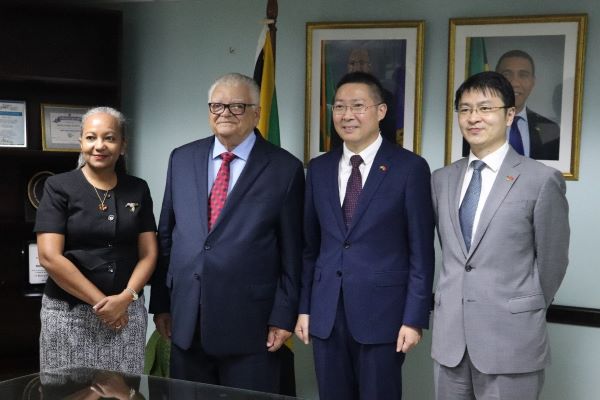